Next Board Elections on the 17/11/2021: Discover the Board candidates!

Ahead of the next Board elections which will take place on the 17th of November on the occasion of our next Forum, please find hereunder the candidatures received until now from members expressing their interest to join the Board of Directors for this new 4 years term: 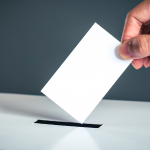 The Members of the Board of Directors have been elected on the 26th of October 2017 for a period of three years which was then prolonged for one year until 2021. Supplementary elections were also organised on the 24th of January 2020 to complete the 5 vacant seats in the Board.

The members of the Board of Directors of Agroecology Europe are the following: